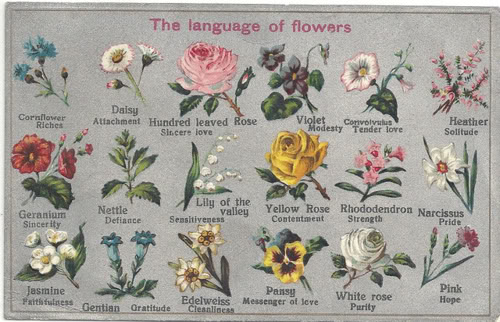 11 MayYou talkin' to me? What your floral arrangements are secretly saying

Over the last few years, a lust for bygone days has swept through society. Downtown Abbey, vinyl records, leather-bound diaries instead of electronic devices.  For some, it is nostalgic – the desire to cling onto a disappearing world. For others who have never experienced a world without the internet, it satiates a craving for a less complicated time, when communication had depth and stillness.

Perhaps that’s why there has also been a stirring of interest of late in floriography or ‘the language of flowers’. We all know that flowers form an essential part of any elegant home’s décor. Yet did you know that your arrangements may also have a hidden meaning to those fluent in the ancient language of floriography? In the 18th century and again in the Victorian era, lovers and friends would employ this cryptic use of communication to circumvent the restrictive social mores of the time. Nosegays and posies would be delivered to prospective amours, ‘meaningful’ bouquets would be displayed in sitting rooms during visiting hours. It is an excruciatingly beautiful art form that was originally brought to England by Lady Mary Wortley Montagu from the Turkish court of the Ottoman Empire. It has also been echoed across the seas for centuries in ‘Hanakatoba’, Japanese flower language.

So perhaps next time you are thoughtlessly placing a bunch of flowers on your kitchen table for their aesthetics, consider what you might be secretly saying to your visitors, who may be better versed in the language than you suspect!

Of course, every beautiful arrangement needs the perfect vase. Some of the most beautiful soft furnishings and homewares in Australia will be on display in Melbourne at Décor + Design 2016, 21 – 24 July in Melbourne. Entry to the exhibition is free for trade visitors; register here.