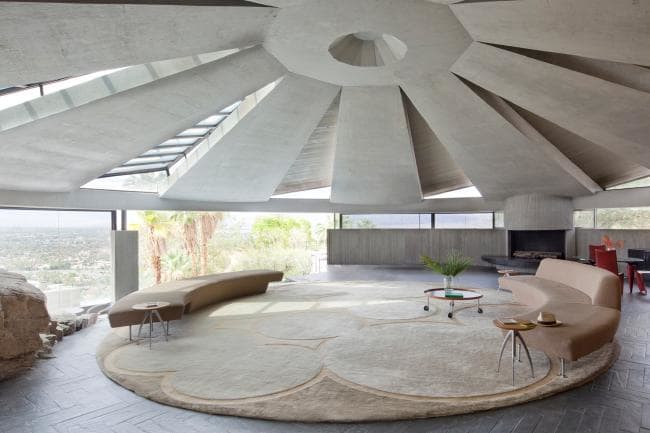 Nestled deep in the Coachella Valley in southern California is a fabled Mecca for modernist design. Its name conjures magic for professional designers and enthusiasts alike: Palm Springs.

Twentieth mid-century design reached its apotheosis in Palm Springs. Only a few hours from the fetid traffic of LA, it is circled by haunting mountains and deserts.

Since the 1940s, Palm Springs has beckoned the great, the good and the not-so-good as a refuge from the bright lights of Hollywood. With its year-round sunshine, it is the perfect place to entertain weekend guests by the swimming pool. 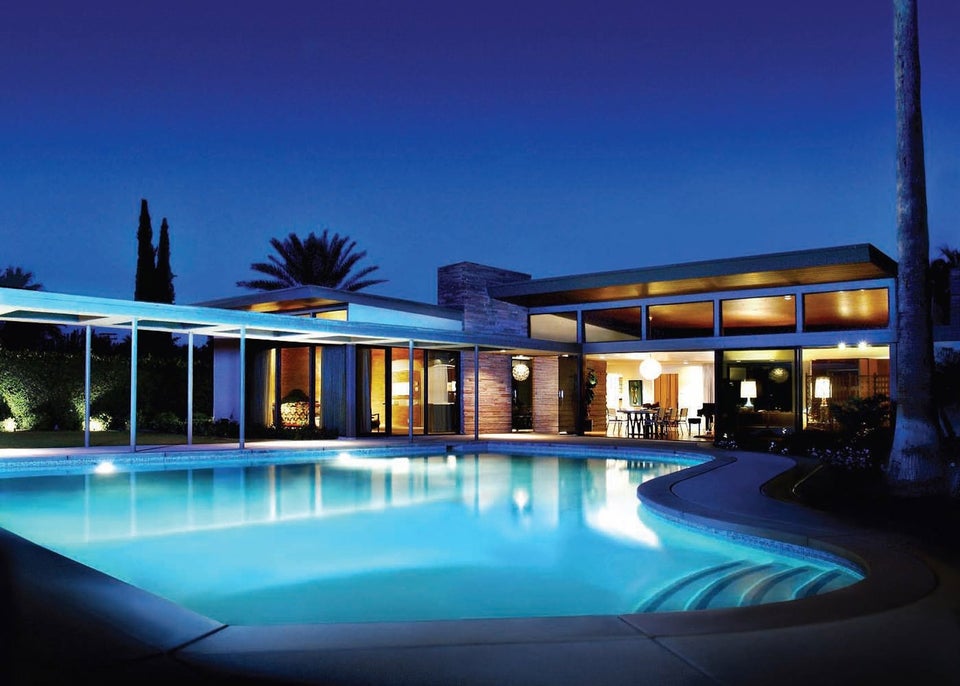 One of the most famous dwellings is the 1947 Sinatra House, or Twin Palms. Designed by successful period architect E. Stewart Williams, it is a wonderful example of ‘desert modernism’.

Sinatra had originally demanded a Georgian-style house, but the architect managed to convince him that it would be entirely inappropriate for the location. Twin Palms is single-story, with four bedrooms and seven bathrooms. It is designed along horizontal lines, with steel features and floor-to-ceiling windows.
The most famous elements of the house are perhaps the swimming pool shaped like a grand piano, and the twin palms that stand beside it.

It is also renowned for its illustrious guests! Sinatra filled the house with Rat Pack luminaries on the weekends, who would lounge by the pool drinking cocktails. It was also the scene of many a stormy argument with his wife Ava Gardner – there is still a crack in one of the bathroom’s sinks from a rogue champagne bottle that was flung in rage by the crooner.

The Elrod House by John Lautner 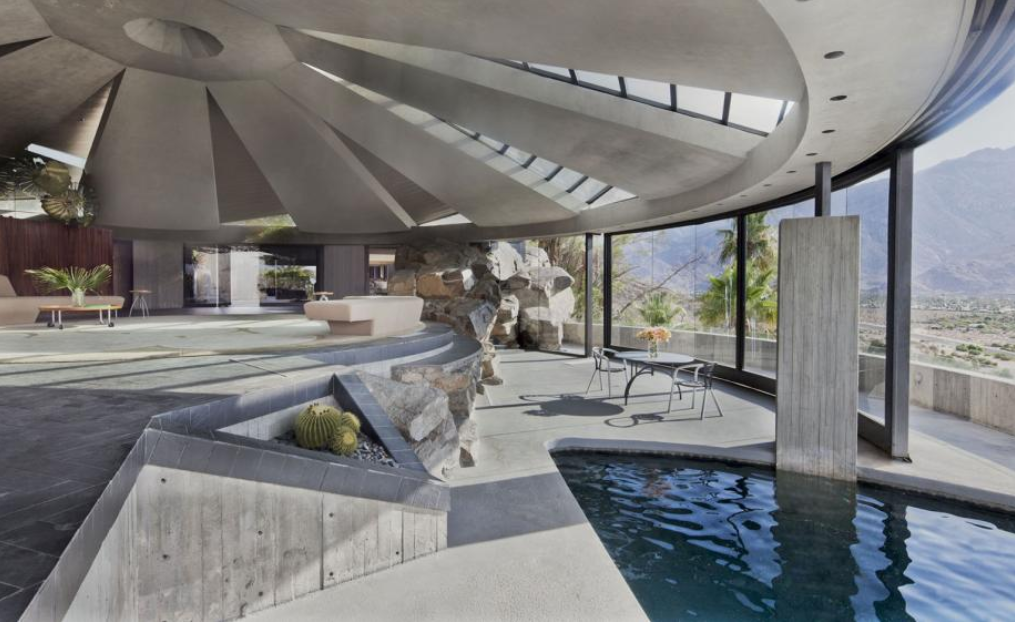 John Lautner is another architect synonymous with Palm Springs. His famed Elrod House will be instantly recognisable to James Bond fans; it featured in the film ‘Diamonds are Forever’.

Finished in 1968, it sits on top of a hill overlooking the valley, with a large concrete dome above the main living area with a circular glass design.

It’s an excellent example of ‘free architecture’, where architecture meets nature. During the build, the rocks were kept in place and form part of the interior, running through the walls and window.

A hugely influential piece of design, the Elrod House has featured in many a film and photo shoot. It was also shot by Decor + Design alum Tim Street-Porter for his book Palm Springs: A Modernist Paradise.

One of the world’s most renowned architectural photographers, Street-Porter says “the Lautner house is amazing – grand, monumental and organic. It would suit me quite well!” 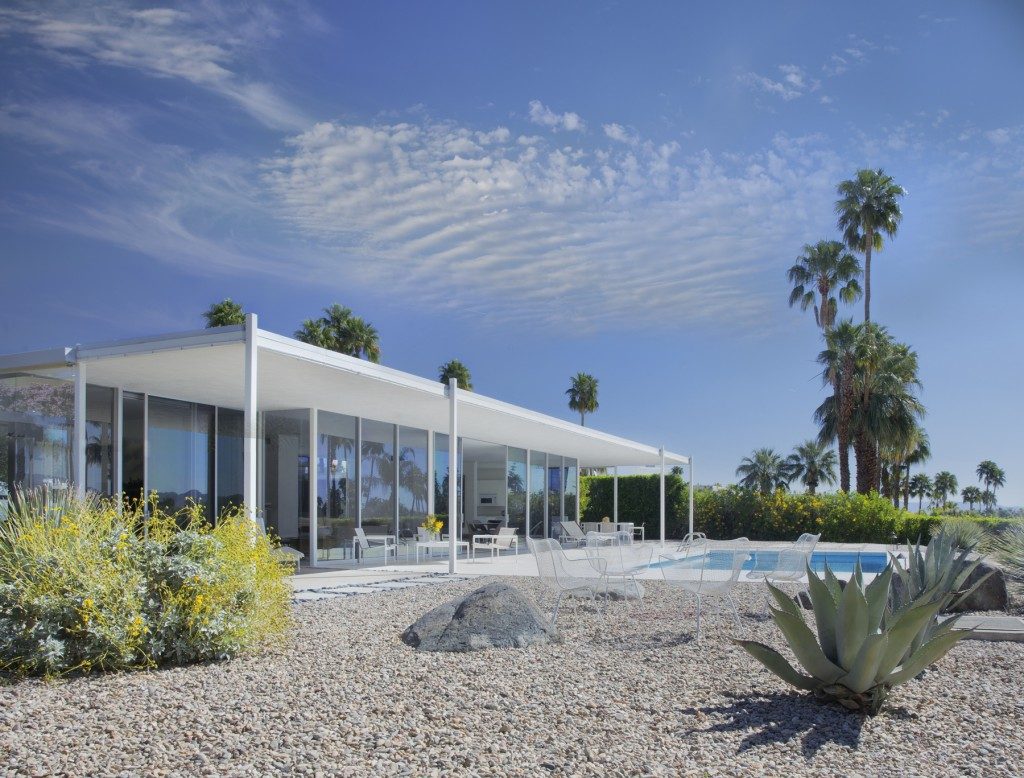 The Glass House by William Cody

The shutterbug also snapped wonderful pictures of The Glass House by William Cody for the book. Also called the Abernathy House, it was designed with poolside parties in mind.

Formed by two L shaped sections then joined by a central unit, its huge alfresco areas are a key feature.

These are encompassed by an overhanging roof that spans nearly 10,000 square feet, with thin white columns to support the pergola. It doubles the livable area of the home, really defining the alfresco lifestyle.

Love to visit Palm Springs? Modernism Week takes place in Palm Springs from 13 – 23 February 2020 and is billed as the ultimate modernist experience. Make it a double design dose next year with Australia’s No.1 Interiors Trade Event, Decor + Design taking place in  July 2020, 16 – 19 at the Melbourne Exhibition Centre.

Subscribe now to receive regular updates on the world of design and updates on the Australian House & Garden International Seminar Series at Decor + Design.