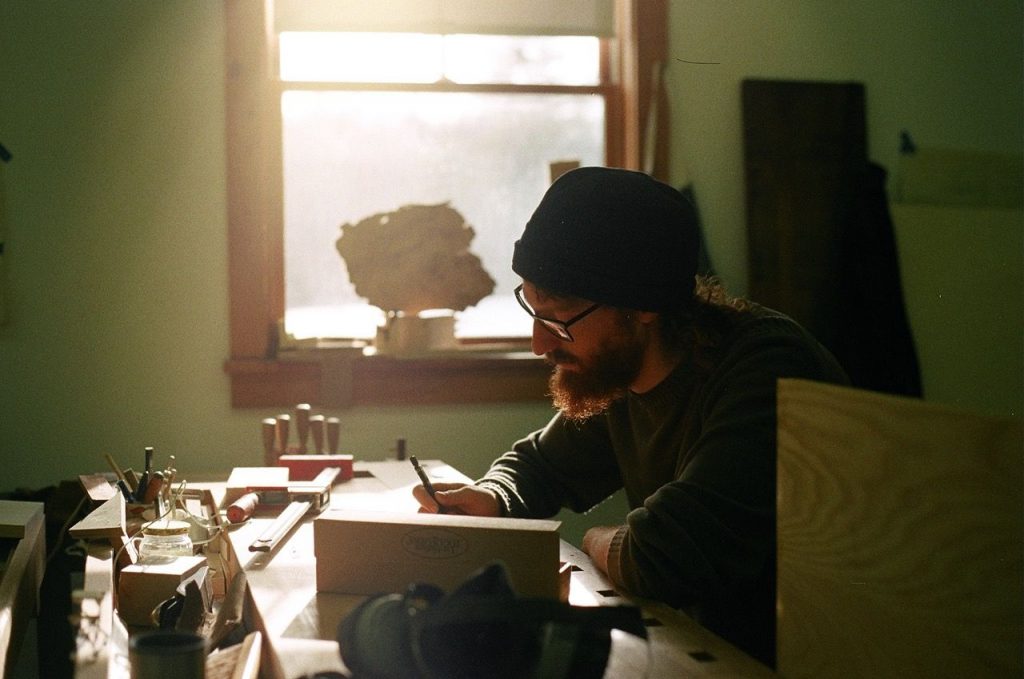 Adam Markowitz’s furniture designs are a breathtaking combination of minimalist beauty and functionality. Over the course of his career, the Australian Architect and furniture designer has developed a design philosophy that values the intimate connection between design and fabrication, finding new opportunities at the intersection of modern digital processes and traditional methods of craftsmanship. 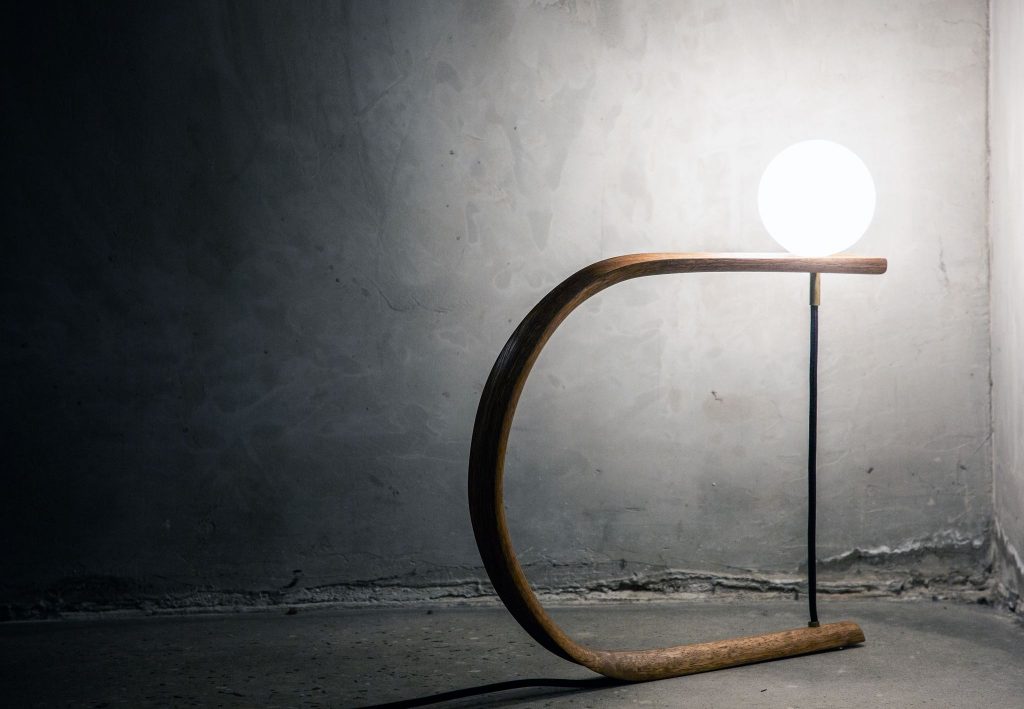 Winning VIVID Design Awards in 2014 and 2016, Markowitz has been asked this year to be part of the judging panel for the 2020 edition of Australia’s longest running competition for emerging designers.

With an extremely high calibre of finalists, this time the awards will be presented live on camera in the Virtual Networking Lounge at Decor + Design 360 at 1.30pm on Tuesday 29th September.

In the lead up to the hotly anticipated event, we asked Adam to tell us about the evolution of his design philosophy, how he’s circumvented the challenges Melbourne has faced during lockdown, and how winning VIVID influenced his career.

Hi Adam! You run a successful multi-disciplinary design practice in Melbourne, with furniture designed and made locally. Melbourne has had a difficult couple of months in lockdown thanks to the coronavirus. How has your work and production been impacted?

My workshop is located at the Meat Markets Arts House in North Melbourne, and when Stage 4 restrictions were announced they made the tough decision to close down the whole facility.

We had a couple of days before they came into place, which allowed me to pack some key pieces of equipment down and set up temporarily at home. As a result, I’m able to continue production of the Assegai pendants, though it is frustrating not having access to my heavy machines. I have had to turn a few jobs away. 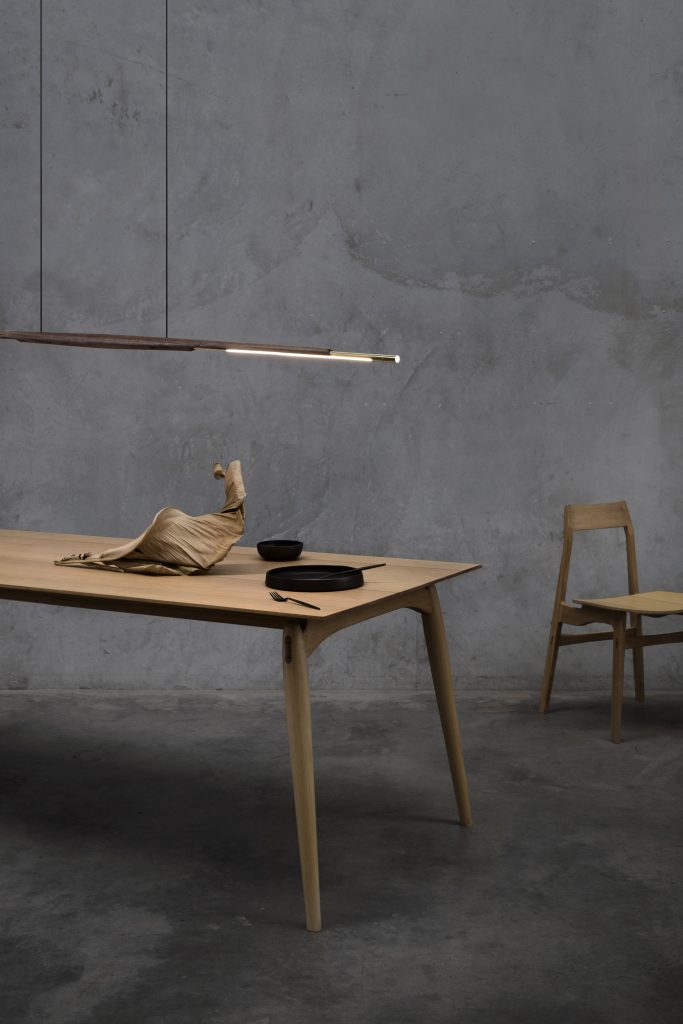 I am fortunate in that I also practice as an architect, and my architectural projects have been able to keep me ticking along through the lockdown, as the drafting is all done on computer so can easily be done at home. It’s been a difficult period for independent designer/makers – the majority of the support packages have been geared at larger businesses who employ staff, so small independent practices are doing it tough out there (go out and support them)!

How would you describe your design aesthetic? In what ways do you fuse modern digital processes with traditional methods of craftsmanship?

I guess I would describe it as “humanist modern”. I subscribe to the ideas of modernism, form follows function, honesty to materials and detailing, attempting to pare things back as much as possible to achieve a minimal elegance.

That is balanced with the recognition that I am designing objects for the human body to use and enjoy, and so things like comfort, curvature and the idea of human connection are considered an equally important “function” which the form has to follow.

I am from the first digitally native generation, but I am also a traditionally trained woodworker – so I don’t see these two elements as antagonists, each have their value and role in the way I practice. I sketch by hand and model in 3D, and I will sometimes cut things by hand and sometimes cut things with a CNC. It’s new territory, but I think it won’t be long before it is the standard way of working. I think the importance is to realise that there is a place for both – there are many that use CNC that don’t understand how wood works because they have never worked it in a traditional manner, and there are also plenty of old woodworkers that see the CNC as a usurper that allows beginners to achieve things that take years to learn to do by hand.

VIVID is Australia’s longest running competition for emerging designers. What did your 2014 award for the Fred Table mean to you? What inspired the design?

Fred was my blending of Danish and Australian design. I had been studying furniture at the University of Tasmania and received a scholarship to study at the Royal Academy in Copenhagen – it was a blend of those two aesthetics. Minimal, but also with a strong poise that is perhaps more evocative of a Featherston chair then a Mogensen table.

The large exposed wedged tenon is also more Australian; we like to see how things work and expose the mechanism. I imagine the Danes would have used the strength of the tenon but concealed it for a simpler language. Winning VIVID in 2014 was my first major prize as a furniture designer. I had taken a risk leaving my position as a graduate architect in 2011 to study furniture making & design, so in many ways it was a validation of that decision. It also helped to get some traction with media which definitely helped raise my profile as an independent designer.

You won again at VIVID in 2016 in the Lighting Category for the ‘Assegai pendant’. It’s a stunning piece of minimalist design. Can you tell us more about the process of producing this piece?

While the light that won in 2016 was pretty much entirely made by hand, these days the production is a combination of machine processes, followed by a final amount of handshaping. 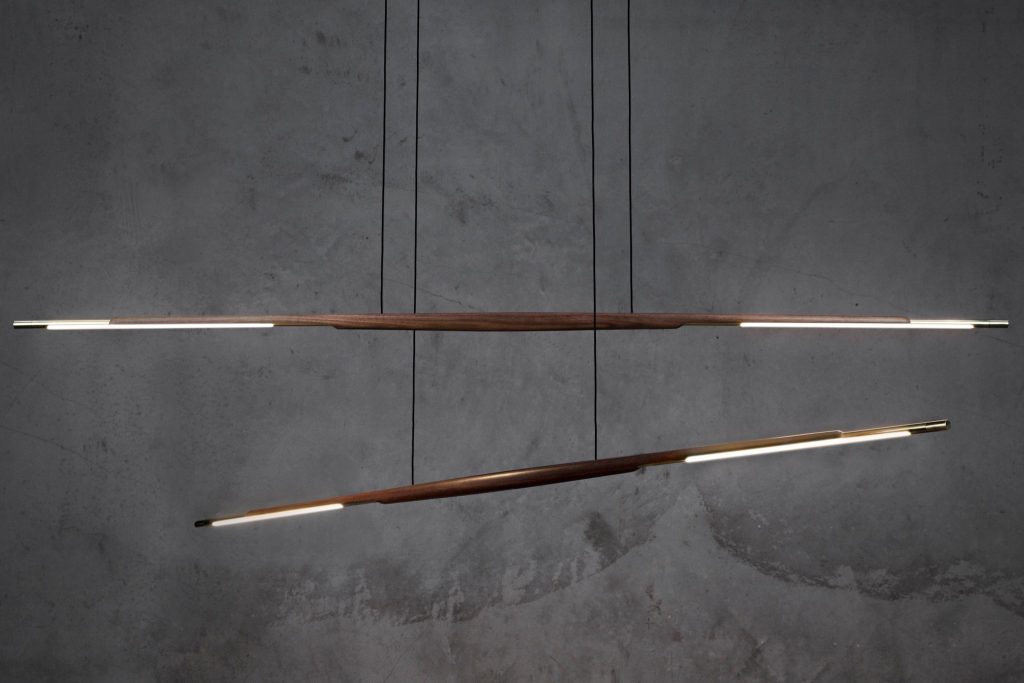 Assegai pendants in close up. By Adam Markowitz

Because the form is quite complex in shape and taper, you can only get so far with traditional machines, and it is much quicker to achieve the final shape by hand. This also means that each pendant is a little bit different – something which is important when you are creating an object of craft, not something mass produced. When you own one of these you can see the traces of my hands on the work, which is a very different experience and relationship to the object compared to buying something mass produced.

You’re a judge this year for the VIVID Design Awards – which will be held virtually – and also teach Design and Architecture at the Melbourne School of Design. Are you seeing the emergence of any new design sensibilities in the next generation of Australian designers? Why are awards like VIVID so important for the industry?

The standard this year was honestly very impressive. I really struggled to even make a shortlist, let alone pick a winner. There was so much good work in there I was stewing over it for ages! Both in the quality of the work and the way it is being communicated/represented. There’s definitely a lot of ‘zeitgeisty’ type stuff coming through (lots of cute geometric forms), and I would encourage young designers to have the courage to find their own design language. It’s very hard to not be heavily influenced when you are just starting out.

For me VIVID has been important not just in terms of recognising up and coming talent, but also in the connections you make within the design community.

I made a number of great friends at VIVID – I met Arthur Seigneur (whose work now sits in the NGV collection!), Red Block Design (who now run their own workshop in Newcastle), I met Bryan from Sawdust bureau, Alex Pontonio who I now share a workshop with, and Dan Treacy who is now Head of Design & Production at Rakumba. At the time he was really generous with his lighting knowledge and in helping me to refine the lighting components of the Assegai pendant.

Don’t miss the 2020 VIVID Design Awards at Decor + Design 360 this year. You can view finalists across categories here. This time the awards will be presented live and online in the Virtual Networking Lounge at 1.30pm on Tuesday 29th September. Register now for the Decor + Design show now to receive your login details to enter Australia’s No.1 Virtual Interiors Trade Marketplace, September 28 – October 2.